There's Three of Them, But They're Not the Beatles

If you got all worked up when the Wu-Tang Clan announced they were sampling The Beatles on their latest album... If you're one of those guys who talks about how Paul's Boutique is, like, the most clever record ever because of all those crazy samples by artists like The Beatles... If you thought his mixing of Jay-Z acappellas and Beatles loops on The Grey Album was proof positive that then up-and-comer Danger Mouse was the next generation's Primo... Then you'll be needing this.
Werner von Wallenrod's Humble, Little Hip-Hop Blog Link to Story

You sort of expect to have to dig through cut and censored prints of foreign horror movies on DVD; but you don't expect it to be just as bad collecting Masterpiece Theaters! Northanger Abbey is the most under-adapted Jane Austen novel. There's pretty much only this version and the 1980s BBC one starring Peter Firth.
DVD Exotica Link to Story

In 1979, Kurtis Blow became the first rapper to sign to a major label, releasing “Christmas Rappin’,” aka “Rappin’ Blow,” on Mercury Records. Being such an early release, nobody was 100% sure exactly what a hip-hop record should entail. Rappers were known for keeping parties energized while DJs mixed records.
HiLobrow Link to Story

Frederick Wiseman is easily on the short list of greatest documentary filmmakers of all time... Errol Morris, The Maysles Brothers, Louis Malle, Werner Herzog (maybe the latter aren't generally considered documentary filmmakers, since they've done so many narrative films that tend to be better known, but they've both also made some fantastic docs). Wiseman stands easily right alongside them, a staple of documentary filmmaking since his controversial debut, Titticut Follies, in 1967. In some ways, his style is very "cinéma vérité"... there's no narration, graphics or formal structure He has an amazing ability to to get candid footage, observing people and discovering surprisingly affecting moments in everyday life. His camera lingers - his films have been known to run over 6 hours long! - with long static shots of human behavior often in places you can't believe anybody would let a documentary filmmaker in to shoot. And he's been making documentaries steadily since his first, visiting all different locales and institutions, as recently as 2011's Crazy Horse. And with all that filming in all different parts of the world and social strata over the decades, it's only natural that some hip-hop would leak its way in. It's pretty rare, though - I suspect he's really not a fan - but it does happen in the occasional film.
Werner von Wallenrod's Humble, Little Hip-Hop Blog Link to Story

Recalling the career of the Trenton icon...
Hip-Hop Connection Link to Story

In 1989, The Redhead Kingpin and the FBI were on top of the game with their debut LP, A Shade of Red, the Spike Lee theme song, "Do the Right Thing," and their hot dance record, "Pump It Hottie," was getting heavy rotation on Yo! Redhead stole the show with his dynamically playful rhymes on Wreck-N-Effects' "Friends to the End."
The Source magazine Link to Story

Fear Of the Rap: Off Your Rap Radar

This is another long one, but I promise it's worth it. Not every Questionable Lyrics post is gonna be about biting, but... Similar to surprise I got when I heard Monie Love repeat a Kane line from my last Questionable Lyrics entry, I had a similar feeling in the mid 90's when I heard Xzibit and Ras Kass each drop the same commercial reference on different songs...
Werner von Wallenrod's Humble, Little Hip-Hop Blog Link to Story

The Golden Voice - Interview with GV of Partners In Kryme

After a long time of searching and getting nowhere, I finally found a way to get in contact with The Partners In Kryme, one of the interviews I always wanted to do since way back in my very first Source days. I'm sure you remember them as the guys that did the "Turtle Power" song back in 1990. So I was finally able to have a good, long conversation with GV, the MC of Partners in Kryme (his partner was DJ Keymaster Snow) and ask him all the questions I'd been dying to asking since I was a kid, including the unreleased album (there was actually two!), the infamous Raphael lyric, a third member of Partners in Kryme and so much more. Did you guys know he was also a part of the early rap group Chapter Three, that put out records back in '82-'83 with T-Ski Valley (both of which made Ego Trip's Greatest Singles list)? But enough intro, I'll let you read it all for yourselves:
Werner von Wallenrod's Humble, Little Hip-Hop Blog Link to Story

That's right ladies and gents!! we've been hijacked by the esteemed writer Werner von Wallenrod. SIX2SIX Guess Blogger. You think I'm gonna grab the mic and waste my nation's time?" This is Werner von Wallenrod guest blogging to ya over at The Six2Six Shift. And for my post here, I thought I'd do something a little out of step from what I'd ordinarily do on my own blog.
The SixToSix Shift Link to Story

I've talked about different discs of Bilitis on this blog before, here and here. But it's time to do it again. It has been alleged by a helpful poster in the comments to my last Bilitis post that the Australian disc might still be better than the new Pathfinder disc (and all the others). So I've now got a copy of the Australian disc (from Amsell Entertainment) in hand.
Breillat On DVD Link to Story

Over the years, I've written about hip-hop music and film for a variety of off- and on-line publications, including The Source Magazine (where I was also a managing editor), Hip-Hop Connection, Diggers With Gratitude, Urban Digital, Rebirth Mag, HiLobrow, The Miami Herald, Hip-Hop Isn't Dead, The Six To Six Shift, and Record Collector Magazine. Oh, and I wrote and edited for The Venue magazine back in college. The majority of my writing, however, takes place on my own blogs:
wernervonwallenrod.blogspot.com (part of my own hip-hop site)
breillat.blogspot.com (on the availability of French filmmaker Catherine Breillat's work in the English language)
toddsolondz.com (on the films of Todd Solondz)
and my latest venture, dvdexotica.com.

I'm also an independent filmmaker whose work has been shown in festivals across the country. My latest film is a short hip-hop documentary called Rap 'N' Reno. 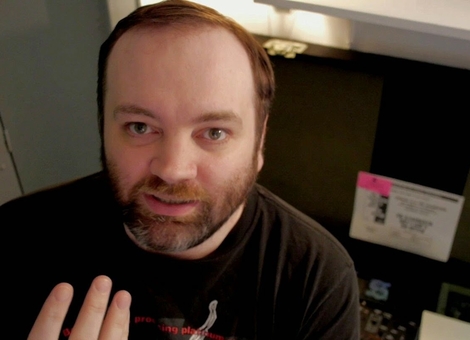